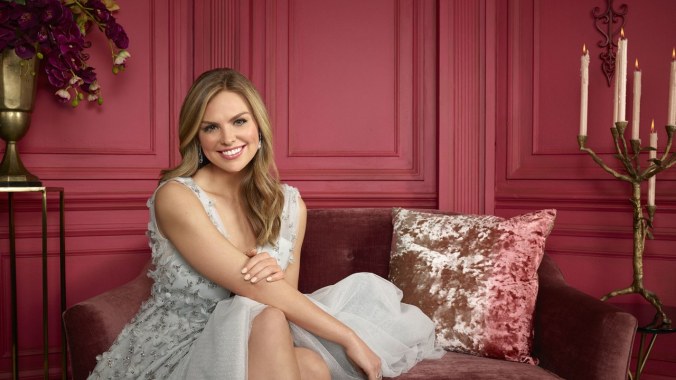 Former pageant queen Hannah Brown doesn’t think it’s reasonable to expect her to not to have sex with multiple men.

I’ve never personally watched The Bachelor or The Bachelorette.  However, after this season of The Bachelorette made headlines everywhere due to the “sex argument” between Bachelorette Hannah Brown and contestant Luke Parker, I couldn’t resist but to look into it.  Here’s a quick summary of what happened on this past Monday’s episode by Lisa Respers France at CNN,

It all started when he [Luke Parker] told Brown that while he’s not a virgin, he’s been abstinent for the past four years because of his religious beliefs and he wanted the same for her.

Saying he was “very confident that were on the same page with our morals and I just want to hear it from your mouth,” Luke P. wanted assurances that there would be no hanky panky between her and the three other men left in the competition.

“Like, I totally have all the trust in the world for you but at the same time I just want to make sure we’re on the same page,” he said. “Like, if you told me you’re going to have sex or you had sex with one or multiple of these guys I would be wanting to go home 100 percent.”

Brown didn’t love the way the conversation was going.

“It’s just that you’re questioning me and you’re judging me and feel like you have the right to when you don’t at this point,” she said. “And I get when you care for somebody that you don’t want to think about somebody being intimate with another person. But guess what, sex might be a sin out of marriage, pride is a sin, too, and I feel like this is a pride thing.”

Brown eventually asked Luke P. to leave, but he wouldn’t move, telling her, “I feel like you owe me at least a minute to share my heart.”

Further, in an interview with People, Hannah stated she felt that she is being “slut-shamed.” She was also clear earlier in the season, that despite the fact that she is a Christian, she engages in premarital sex and doesn’t have even the slightest qualms about it. After all, Jesus loves her anyways. For those that wish to watch the actual conversation between Hannah and Luke from the most recent episode, it can be found here:

Those of you who have followed my content for awhile have likely seen the videos I’ve made in response to Katie Emmerson, Tiffany Dawn, and others in which I explain that a person’s sexual history is extremely important when it comes to relationships, especially a lifelong commitment like marriage. To be clear, I support the rights of everyone to make their own decisions about sex and relationships provided no one else’s rights are being violated in the process. However, having the freedom to make your own decisions about sex does not change the fact that such decisions have consequences and that no one has a moral obligation to ignore those consequences when considering you as a marriage partner.

This is why I have to say that Luke Parker dodged a huge bullet by not winning The Bachelorette. I’m also virtually certain that whoever does win will see his marriage to Hannah crash and burn within a few years, if not earlier. Hannah displays an all too common attitude among women these days that is making more and more men turn away from marriage. She seems to think that relationships are all about her and doing what makes her happy.

In ages past, it was understood that marriage was unique from every other kind of relationship, and that both husbands and wives had obligations to one another. To be sure, various cultures have had nuanced views about precisely what these obligations were, but there were obligations. A young person’s capacity to be a husband or a wife could be directly evaluated based upon their capacity to perform the duties of a husband or a wife, and making such judgements about a potential spouse was not only acceptable but encouraged.

How does this attitude play out when selecting a marriage partner? Well women are certainly free to have whatever standards they’d like for their men. After all, it’s about her being happy. But men on the other hand better not have ANY expectations for their women. This would be judgmental, and you guessed it, that would make her unhappy.

As sad as it may seem, this is the reality of the world we live in. If a man fails to provide for his family, cheats on his wife, or neglects his children, society will have no problem calling him a deadbeat, regardless of how unhappy he may be. However, if a woman does precisely the same, it must be the fault of her husband. He must’ve somehow driven her away, and more than that, made her unhappy. Divorce courts regularly reward women with cash and other incentives for initiating divorce, regardless of how frivolous her reasons for the divorce. Female happiness is the supreme good.

So, what does this have to do with Bachelorette Hannah Brown?  Well for one, Luke Parker’s desire that she remain chaste until marriage is not a purely religious concern.  Studies have shown overwhelmingly that the number of sexual partners a woman has prior to marriage correlate with the likelihood that she will divorce once married.  It is not at all unreasonable that Luke should want Hannah to avoid having sex before marriage if he genuinely wants to marry her, since this is an important indicator of whether or not their marriage would be a success.

However, even if this were not the case, Hannah’s willingness to sleep with multiple men on a show that’s supposedly about finding a husband speaks volumes to what her behavior as a wife would be like. It should be no surprise to anyone that the best indicator of a person’s future behavior is their past behavior. What then do Hannah’s actions say?

If Hannah is willing to have sex with multiple men today, do you really think that’s going to magically change once a ring slips onto her finger? Hannah openly admitted that the God she claims to follow disapproves of premarital sex. But it doesn’t matter, Jesus loves her anyways. If she so easily disregards the commands of her God in order to do what feels good in the moment, what kind of respect could she possibly have for the wishes of her husband? Will she say no to extramarital affairs, squandering her husband’s income, or neglecting children in favor of fun and thrills?

I have to ask. Why would ANYONE, Luke Parker or otherwise, want to marry someone with this kind of attitude? What possible benefit could there be to legally latching yourself to this level of narcissism?

It’s no wonder that more and more men are choosing to turn away from marriage all together. When women like Hannah Brown spout this attitude on national television and get praised for it, young, impressionable women go on to emulate her. As time goes on, men appropriately recognize the risks of marrying such women, and turn away from it altogether.

Most men are not interested in committing to, or discussing commitment with, women who put pleasure above self-control. Most non-Christian men will have sex with a hedonistic woman, but they are too smart to ever commit to them. Why would a man commit to a narcissist? If a man’s role is just to please the “huge feminist”, then there is no reason to commit to her and be the slave of her selfish impulses for the rest of his life. Radical feminists believe that relationships are about their plans and their needs. They are not interested in responsibilities, expectations or obligations to men or to children. Most men, even secular men, understand that they must not marry a woman who rejects moral obligations for fun. Especially with the looming threat of no-fault divorce.

Congratulations Luke Parker. You might be slandered in the media, but you’re the real winner of The Bachelorette.

And that’s my 2 cents. Take it for what it’s worth.